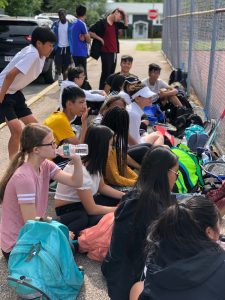 The 8th seeded Randolph hosted the 2019 MIAA tournament. It was the very first time to host it in the team’s history.

At the very beginning with spectators gathered, both Bishop Stang’s #1 singles and doubles outplayed their counterpart. While only #3 Singles junior Leandra Depina was competing evenly, #2 Singles junior Camille Baptiste and #2 Doubles senior-duo Ashley Goncalves/Chrystal Valentin were struggling and lost the 1st set. And they were still behind in the 2nd set.

Almost everyone assumed Bishop Stang was taking the match by 4-1 very much soon.

But Randolph started proving they could compete. #2 Singles Camille fought back, came back from 2-4 down and took the 2nd set. In the decisive 3rd set, she was behind again 4-5. But again, Camille refused to lose. She was very patient, played very smart to make the opponent hit more risky shots to close the point easily.  Camille took 3 games in a row brilliantly, and won the match!!

Now Randolph tied the match 2-2 while #2 doubles match was still going on.

They lost the 1st set badly but regrouped their composures, and won the 2nd

set by 6-3. Senior Chrystal Valentin played great. It could be her best performance since she started playing for the team 4 years ago. She brought everything she was capable of with her long-time doubles partner, senior co-captain Ashley Goncalves.

They were ahead 6-5 to close the match but couldn’t. Even in the decisive tie-break, they had a chance but their counterpart managed all pressures and fears to close the match. All Ashley and Chrystal’s efforts fell short, lost the match by 2 points behind, 6-8 in the 3rd set tiebreak.

Randolph lost the first round match of 2019 MIAA Tournament. But overall, the team achieved not only the goal to clinch the tournament berth but also broke the team’s winning record from 11 to 13 wins!! In 2017, the team won only two matches. Last year they won 5 matches from the very end of the season after new skill sets they learned kicked in.

2019 Spring was the best season for the lady Blue Devils. Although the practices were so intense and hard, they paid off : ) Congratulations!!