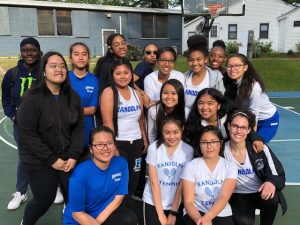 Congratulations to Leah Kadesch the head girls varsity tennis coach. Coach Kadesch was voted by her peers as the “Coach of the year” for the south shore league.  In only her second season at the helm the Blue Devils finished the regular season with a new program high 13 wins and 5 losses qualifying for the the MIAA tournament for the first time since 2013.  The team earned the 8th seed before falling in the first round to Bishop Stang on Tuesday, June 4, 2019 in a tightly contested match that lasted three hours  coming down to two tie breaker sets in the 2nd doubles before falling short 2-3.

The future of the girls tennis program looks very bright with Coach Kadesch at the helm!